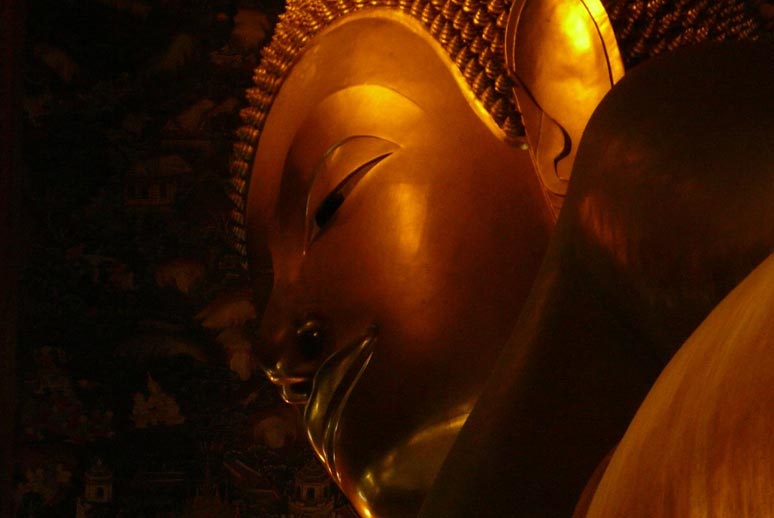 Yesterday, I posted Part 1 of this 3 part blog post. If you missed it, click HERE to catch up on Part 1 first.

Waking in the pitch black, to the clang of brass bells swinging under the steady hands of the Buddhist nuns in the hallway the next morning, was a new experience.

4am was time to rise, robe up and shuffle along to the temple’s altar for two hours of chanting… in Chinese.

The day before I’d had to make a big decision about whether to shave off my long locks in a Buddhist act of non-attachment.

Decidedly happy to be a novice in the enlightenment game, I bypassed the clipper’s chair, taking my vow of silence for the week instead to become one with my fellow wisdom seekers.

Entering the temple for chanting each morning, it was clear we were now in sacred territory. Staring right back at us as we lined up obediently in pews, was the most gigantic golden Buddha statue I had ever seen. It was majestic, ornate and beautiful.

Beauty aside, the Chinese words we were invited to chant on loop were awkward and meaningless to me. But I persisted… like a good Buddhist in training.

Our days then opened up to sitting and walking meditations, karma yoga practices of sweeping paths, scrubbing floors, pulling weeds etc to better the beautiful temple grounds, and our group meal gatherings in silence.

As a seeker of wisdom and knowledge, my favourite part of the day came each afternoon, when we would settle in for dharma classes with the Buddhist nuns under a big whispering gum tree. It was there we were allowed to break our silence to ask questions about Buddha and his teachings.

Buddha became enlightened after meditating for 49 days under a Bodhi tree, which is a large and sacred fig tree. I wondered whether our great gums had the same power to support enlightenment. I loved the classes but by the end of day three, I could feel a hint of overwhelm setting in. So I started to question my moves and actions.

You see, chanting is the traditional means of preparing the mind for meditation. But what was I doing chanting in a language I didn’t understand? It was leaving me with the same empty feeling I’d had singing boring hymns from ordered pews in my Catholic Church on Sunday as a girl. Hmmm…

I was trying to find a reason to take part in the ordination ceremony on the final day, but I was only drawing blanks.

By day four, the pressure continued to rise. I was feeling anxious as my mind, speech and body slipped out of alignment. I wanted out. So, after dinner, I cornered a robed up nun in the hallway to let it all out. God help her, and me, I thought.

As I opened my mouth, I felt a surge of energy race up through my torso, my chin began to wobble and as the first words dared to leave my lips I burst into tears. “I’m feeling so weird about being here,” I said through a decent spray of wet confusion.

“I don’t understand the Chinese we’re chanting in.” I blubbered. Oh, dear… some wailing to come perhaps. “I came here to learn wisdoms…I came to learn about Buddha and his Buddhism… But who is he? I don’t know Buddha. I don’t know enough about Buddhism to call myself Buddhist and I feel all out of integrity as I’m bowing down to that beautiful golden Buddha statue each morning in the temple. I feel like a fake turning up to be ordained. I’m not a even a Buddhist. How can I become a monkess?!”

As I stood in the hallway speaking sacrilege to the nun, I was preparing myself to be met with some kind of punishment for my violation of faith and lack of commitment. I couldn’t even raise my head high enough to look at her. I felt like a right nutter.

And then… the words that were returned made me fall in love… with humanity, with Buddha and Buddhists everywhere… all at once.

“Oh darling girl,” she said warmly and softly, in a funny kind of asian English. “That big gold Buddha is just material that is sculpted into shape. The meaning of it, however, can be anything you want. If you don’t feel the connection to Buddha, just replace it with whatever it is that you do believe in that’s good or pure.”

I was utterly perplexed. I mean, I was in a Buddhist temple. She was supposed to be selling me into the Buddhist philosophy, like the travelling Seventh Day Adventists that come to the door, like the priests who had told me only their God would set me free.

Part 3 – Read more about one Buddhist nun’s wisdom and how I digested it, here: http://soulsessions.org/free/blog.php?id=157